With the official announcement of Seattle’s NHL team name, hockey fans are now asking a new question: who will be the first players to pull on the Kraken jersey for a game? Furthermore, which former Winterhawks might we see as part of the inaugural Kraken team? As we hope for the start of the WHL season and eagerly await next summer’s expansion draft, fan speculation has already begun. Each of the 30 current teams in the NHL who do not call Vegas home will be losing one player to the Seattle Kraken. 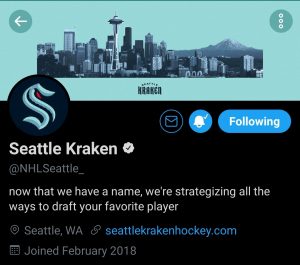 A quick look at the requirements for selection

The Seattle expansion draft will follow the same rules that were used when Vegas entered the league. Any player with two years or less of professional hockey experience at the time of the expansion draft is ineligible. This means that any player who has not already played two seasons of professional hockey may not be selected (e.g. Blichfeld). Also exempt are unsigned draft picks who are on a team’s reserve list (e.g., Newkirk). There is also a requirement that teams leave available at least one defenseman and two forwards who each played a minimum of 40 NHL games in the 2020-21 season or a minimum 70 NHL games combined between both the 2019-20 and 2020-21 seasons.

Using these criteria, I have categorized 21 former Winterhawks who could potentially be selected in the Seattle expansion draft. Most of the players on this list will have to sign a new NHL contract or two before being eligible.

Available but not likely to be taken

Paul Bittner – Bittner has been stuck in the AHL for the entirety of his professional career thus far, and it would be nice to see him picked up. However, he would need to sign an NHL deal that runs through 21-22 as he is an RFA this year.

Tyler Wotherspoon – At the moment, it looks as though Wotherspoon will hit free agency next summer. He has spent most of his professional career in the AHL, most recently with the Lehigh Valley Phantoms. Seattle may look to add him to its defensive lineup, but I don’t find it likely.

Colton Sceviour – Like Wotherspoon, Sceviour will enter free agency in 2021 if not signed to a new NHL deal. However, he needs only one game in the 20-21 season to qualify as one of the forwards required to be exposed. The Panthers may be willing to leave him available next summer.

Taylor Leier – After having successful shoulder surgery and being traded from Philadelphia to Buffalo last year, Leier has continued playing in the AHL with the Rochester Americans. He has spent the previous five seasons split between the NHL and AHL levels, and he could be a valuable acquisition by Seattle should he be available.

Available and could be selected

Caleb Jones – Caleb is under contract with the Edmonton Oilers through the 2021-2022 season. This season, he spent 43 games in the NHL with the Oilers and another 14 in the AHL with the Bakersfield Condors. He has entered the Western Conference bubble with the Oilers. There is a decent chance that Edmonton leaves Caleb exposed next summer, so we just may see him on the ice for the Kraken in 2021.

Derrick Pouliot – Pouliot is currently in the Western Conference bubble with the St. Louis Blues after spending most of the season in the AHL with the San Antonio Rampage. During the season in San Antonio, he played 58 games and another 2 games with the Blues before the season’s suspension. He would need to sign a new contract with an NHL club, but the former first-round pick could find himself in Seattle come 2021.

Kieffer Bellows – Making his NHL debut with the New York Islanders just over five months ago after spending the last two seasons in the AHL with the Bridgeport Sound Tigers, it looks like Kieffer is hitting his stride in professional hockey. As with just about every player on this list, it’s likely that his availability in the expansion draft is dependent on his play next season. He is another that will need to sign a deal that runs through 2021-22 before next summer.

Dennis Cholowski – His contract with Detroit runs through the 2020-21 season. He has spent the last two seasons splitting time between the Red Wings and the Grand Rapids Griffins of the AHL. Cholowski could be a regular on the Kraken roster should he find his way onto it.

Brandon Dubinsky – He sat out the 2019-20 season due to injury, so it much depends on if he gets a full season in 2020-21 as it is the final season of his current contract. After a wrist reconstruction surgery last year due to a potential “chronic condition,” it will be interesting to see how he comes back. Dubinsky could be a steal for the Kraken in 2021 if he makes a successful return.

Available and would be a great acquisition

Sven Bärtschi – Due to a loaded Canucks roster this year, Bärtschi spent 43 games in the AHL with the Utica Comets. While seemingly stuck behind a deep roster of young Canucks, he could be a substantial asset to an expansion team should he sign to a new NHL contract.

Luca Sbisa – Sbisa suffered a few injuries in 2017-18 and hasn’t played a full season since. He has spent time with the Islanders during 2018-19 before finding himself with the Winnipeg Jets this season. Currently, Sbisa is with Winnipeg in the Western Conference bubble. He would offer leadership and experience to the expansion team, especially having gone through an expansion draft once before.

Braydon Coburn – Coburn would bring Seattle years of NHL experience from a team that has been especially dominant in recent years. He has entered the Eastern Conference bubble with the Tampa Bay Lightning. His current contract only runs through 2020-21, and he would be 36 when the Kraken take to the ice for the first time, but he may just have the experience to help the Kraken establish their legacy.

Adin Hill – Hill has been a strong third goaltender for the Coyotes. Should anything happen to Kuemper or Raanta, Hill could find himself in a starting position for Arizona. If he is somehow left exposed by the team, he could be a valuable addition to the Seattle roster, but Arizona will likely not be willing to lose him for nothing in return.

Ryan Johansen – Johansen has established himself as a solid top-6 forward in the Nashville lineup. The only reason I can see Nashville being willing to lose him in the expansion is his contract which earns him $8 million a season through 2024-25.

Seth Jones and Oliver Bjorkstrand – I have these two combined on the list because I genuinely do not see Columbus letting go of either player. Bjorkstrand would need a new deal in place before the 2021-22 season. Jones is under contract through 2021-22 at $5.4 million a season. Bjorkstrand would likely be available before Jones is. However, I doubt either will be.

After months of rehabilitation, Seth and Bjorky are BACK!

Read what the two longtime pals had to say about returning to the ice for Training Camp. ⬇️https://t.co/ORvwRhRMCp

Matt Dumba – I have him in this group while being fully aware that Minnesota has already surprised me with previous trades. I won’t be overly surprised if the Wild were to make an unexpected decision here. I just don’t think it likely unless they want to free some cap space. His contract runs through 2022-23 at $6 million a season with a modified NTC that starts in 2021.

Nino Niederreiter – I feel the same way about Niederreiter’s chances of being left exposed for the expansion draft as I do with Matt Dumba. I don’t believe that he will be left exposed. I just won’t be overly surprised if he somehow is.

Henri Jokiharju – I said this just hours preceding his trade from Chicago to Buffalo, but there is no way Buffalo lets Jokiharju go anywhere. He has so much more to offer them, and as they are building a younger, stronger core, he is going to be fundamental for the Sabres long term.

DUBNetwork › Forums › The long way from Portland to Seattle (Kraken)