Every major junior hockey team enters each season hoping to achieve maximum benefit from the two allotted import positions on its roster.

The jockeying for players requires some research and preparation, along with a measure of good fortune.

The Medicine Hat Tigers have enjoyed some success in recent years, identifying import players, landing them in the Gas City, then helping them to develop and contribute.

“Well, Tomas Kundratek was a very big part of our team when he played”, Frazer said in an interview with DUBNetwork at the Canalta Centre.

Kundratek was selected in the third round of the 2008 NHL Draft by the New York Rangers, then played two seasons in Medicine Hat from 2008 to 2010. He bounced around the NHL and AHL before settling in the KHL.

“And (Marek) Langhamer was a very good goalie for us,” Frazer added. “Interesting, his last season he was the last import goalie in the league. He did a really good job for us.”

Langhamer, now 25, appeared in 149 games over three seasons for the Tigers. He was a late-round selection by the Arizona Coyotes and has now landed back in Europe.

While some view the CHL import draft as a bit of a crapshoot, it has in fact become marginally less difficult of late to assess players. When teams make these decisions, that research is important to ensure a good fit – a good opportunity to sign the player.

“The whole import draft can be a funny thing,” Frazer said. “It’s kind of agent-driven, but now with the technology, you can watch a lot of video on players, too. So, you definitely have to do your homework. And, it’s tough each year to try to manage through what agents have which players.

“I think we can look at anywhere from 20 guys up to 50 of them. Hopefully, you’ve done enough homework to where you pick the best ones.

Nassen, from Sweden, was a stalwart on the backend while in Medicine Hat, appeared in well over 100 games. The Florida Panthers selected Nassen in 2016 but did not sign him. Dahlstrom, a Swedish forward chosen by the Chicago Blackhawks, played one season with the Tigers and chipped in offensively with 72 points in 74 games.

From the player’s perspective, the CHL becomes a potential option depending upon one’s future playing goals. To ensure exposure to NHL scouts, opting for a temporary address in North America can be considered a viable option.

“Obviously the NHL scouts love our league, how the game is played,” Frazer said. “They love the schedule. It’s a grind for the players.

“It’s not just for the imports coming into this league, but Canadians and Americans as well. We believe it’s the best development league in the world.”

The real gem presently in Medicine Hat is goaltender Mads Sogaard from Denmark.

“Well, just looking at Mads with us last year,” Frazer said. “The year before he’s playing in Minnesota, in the North American Hockey League, and that’s a really good league as well.

“But, just the number of scouts you get in the WHL. We saw it at the NHL Draft, I think we had the most players drafted again.”

Sogaard was selected in the second round at the 2019 NHL Draft in Vancouver by the Ottawa Senators. He was the first WHL goalie chosen, the 37th overall pick.

“Mads got here today, so we’re kind of just talking about what Ottawa has done,” Frazer said. “They’ve kept in touch with him throughout the summer. We’re going to get our goalie coach and them to connect and just kind of go over the game plan – what we see from Mads and what they see, so we can make sure it’s the best for everyone.

“And, he’s getting ready for further development camps. He’s really excited to be back and  we’re very fortunate, too.”

Last season, Sogaard appeared in 37 games and compiled a 2.64 goals-against average and a stealthy .921 save percentage. Although the Tigers were eliminated in the first round of the playoffs by the high-octane Edmonton Oil Kings, Sogaard gave his mates a chance to win, posting a .919 save percentage in the six-game series.

Frazer likes Sogaard’s competitiveness. At 6-foot-7 and 190 pounds, he is the tallest goaltender in the WHL, an attribute that cannot be taught.

Last season, Sogaard took over the starting role with the Tigers from veteran netminder Jordan Hollett, who played four WHL seasons. The 20-year-old will not be back this season, opting to begin his post-secondary education. This makes Sogaard the go-to-guy and the coaching staff will have to bring along an understudy behind Sogaard.

For his part, Sogaard is happy to be back in Medicine Hat after a busy summer.

“I decided to go home for a month and a half and spent some time with my family,” Sogaard said. “Then I was out to San Diego and start working out there, been working out there ever since. And now I’m back on Canadian soil!”

The experience in San Diego was important for Sogaard, a training adventure he undertook with an eye on a busy 2019-20 season.

“There’s a lot of the off-ice stuff and the trainer I have down there is really good with that,” Sogaard said. “It’s a lot with your own body and moving well. And I think that’s huge for me, especially going into my second year now.”

“I want to play more games and be a big part of this team. I think it’s huge for me to stay healthy. My body is feeling good.”

“That was the most important thing for me – just trying to prevent injuries.”

Sogaard is a well-spoken and animated youngster, seemingly not hesitant to get into self-deprecating mode.

“So, I don’t know what’s going on, what they’re doing when they’re measuring me. But you know, I just sticking with 6-foot-7. I’ve got no clue. But that’s my guess.”

And, when coaxed by Mitch Bach of CHAT News about his first order of business upon returning to Canada a few days ago, Sogaard deadpanned, “what do you think? Tim Hortons!”

At the 2019 CHL Draft, the Tigers selected Jonathan Brinkman Andersen 34th overall. He’s a forward from Denmark who was recognized at the WJC as one of his team’s top three players during the tournament. 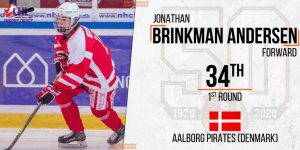 Should he crack the lineup, one can envision some extra stitching for an over-sized name bar on his jerseys, though there is some chatter he may land here simply as Jonathan Brinkman.

The 18-year-old is expected in Medicine Hat this week to begin skating on Canalta Centre ice.

Sogaard could hardly contain his excitement as he provided some insights on his hockey-playing compatriot.

“I know him very well,” Sogaard said. “We’ve, grown up together. We started playing together when we’re around three or four years old. And we played together up till I was 15. Even after I left my hometown team, we played on the national team together.

“He’s a great player. He’s going to help us out and hopefully he can come in and have a really good rookie season and just help us win. That’s the most important thing.

“I’ve been on the phone with him a lot and he’s all for it. He’s very excited to come here. We’re all looking forward to having him here.”