Early on Tuesday, about midway through its current road trip through the Central Division, the Portland Winterhawks arrived at the Canalta Centre from Calgary to find snow on the ground throughout southern Alberta.

Perhaps it was simply the “winter” in Winterhawks?

Appropriately, the Medicine Hat Tigers were motivated to provide a cool reception and they did so by pelting the Portland net with 48 shots in a 4-2 victory over the visitors.

It took awhile though, as the Tigers faced a hot goaltender in Winterhawks surprise starter Isaiah DiLaura.

“I think there are some times when the guys are getting a little frustrated,” said Tigers assistant coach, Joe Frazer when asked about the mood on the bench when the opposition goalie seems to be getting in the way of everything. “But, if you stay on them and you know we’re creating chances, they’re going to start to go in.”

DiLaura, now 19, was acquired by Portland from the Prince George Cougars to take some of the pressure off number one netminder, Joel Hofer. The Minnesota native was outstanding, stopping 44 shots on the night and giving his charges a legit opportunity to win.

Portland was aggressive early, heavy on the forecheck in the attacking zone. Tigers goaltender Mads Sogaard was equal to the task, especially when he thwarted Jaydon Dureau after a deft feed from Seth Jarvis on a two-on-one break.

Medicine Hat pushed back, testing DiLaura, controlling the attacking zone on a power play midway through the first frame. Despite the swift puck movement, the Tigers could not solve DiLaura and the teams were scoreless after 20 minutes.

In what could very well be a WHL first, the game featured three imports from the same city.

Brondberg, Sogaard and Tigers forward Jonathan Brinkman are all from the city of Aalborg, Denmark. The three were seen huddling beneath the seats at Canalta Centre following the game.

Hanus, unfortunately, figured in the second goal of the game which was the Tigers equalizer at 6:07. James Hamblin took a pass from Eric Van Impe and sped in on DiLaura, got off a shot that struck the goaltender before the puck bounced into the net off Hanus.

At the 7:52 mark, Hanus did some more damage, this time in the attacking zone. The Excelsior, Minnesota product beat a Tigers defender wide and sifted a shot toward the net that fooled Sogaard. It was a weak goal, a shot Sogaard played poorly, slightly separating himself from the post before Hanus released the shot.

Medicine Hat trailed Portland 2-1 after 40 minutes, despite outshooting the visitors 27-22.

The hosts would blow it open in the final frame, peppering DiLaura with 21 shots.

The game turned near the midway mark when the Tigers scored twice in four seconds. At 8:03, with Winterhawks forward Jack O’Brien in the penalty box, Brett Kemp took a pass from Parker Gavlas, turned Brondberg inside-out at the blue line and beat DiLaura low stick side.

“(Parker) Gavlas gave me a nice pass and I saw some room open up,” Kemp said. “I got the defencemen flat-footed luckily enough and got around them.

“We had to play desperate, all the time. We know for sure we’re getting chances.”

The forward line of Kemp, Cole Sillinger and Ryan Chyzowski, was a force all night long and despite a few ill-timed decisions around the Portland goal, the trio could have had the verdict well in hand early on. Through eight games, the chemistry is evident.

“I think they’re two unbelievable players,” Kemp said of his linemates. “We’re just trying to build. You look at Cole and you don’t think he’s 16, he plays like a 20-year-old out there and kind of dominates, so you just want to get open because he’s gonna find you.”

From the ensuing face off after Kemp’s marker, Tigers defenceman Daniel Baker collected a loose puck at centre ice and drifted a shot from the red line that somehow eluded DiLaura along the ice at 8:07. It was Baker’s first of the campaign and would serve as the game-winner

Trevor Longo, with his second of the season, rounded out the scoring for Medicine Hat with 5:29 to play.

Ice Chips…Three stars were Kemp, DiLaura and Sillinger…The Tigers were 1-for-3 on the power play. Portland did not have an opportunity with the man advantage…DiLaura’s last WHL win came against the Regina Pats on Nov. 23, 2018 while he was a member of the Prince George Cougars…Medicine Hat scratched RW Corson Hopwo and D Damon Agyeman. Portland scratched D Nick Perna, RW Kurtis Smythe and RW James Stefan…Portland entered the affair undefeated (2-0-0-0) in games they led after 40 minutes…Portland is one of seven WHL teams that has not gone to overtime this season. The Tigers have played extra time twice…NHL scouts were out in droves, likely due to five Winterhawks being listed in the most recent NHL Central Scouting rankings…Attendance at Canalta Centre was 2,427.

Tigers Tales… Medicine Hat, now 5-2-1, has outshot its opponents in all eight games this season…Cole Sillinger, 16, is second in WHL scoring among rookies with seven points…Rookie defenceman Dru Krebs leads the team with a plus-7 rating…Hamblin leads the team in scoring with four goals and five assists for nine points…Tigers rookie goaltender Garin Bjorklund earned a C-rating and is the only member of the Tigers to appear in the current NHL Central Scouting rankings. Of the five WHL goalies listed, three reside in the Central Division including Bjorklund, Jack McNaughton (B-rating) of the Calgary Hitmen and Bryan Thomson (C-rating) of the Lethbridge Hurricanes…The Tigers host the Winnipeg ICE Friday, then Red Deer pays its second visit of the season on Saturday for the Tigers “Pink in the Rink Night”.

‘Hawks Talk…G Joel Hofer started the first five games of the season for Portland. While DiLaura was outstanding against the Tigers, the smart money is on Hofer getting the nod in goal when the ‘Hawks play the Broncos in Swift Current tonight. Hofer, drafted by the St. Louis Blues, was acquired by the Winterhawks last season from Swift Current…D Matthew Quigley (Chestermere) and C Lane Gilliss (Calgary), both now 20, are the only two Alberta-born players on the current Winterhawks roster…Portland had won its two previous visits to the Canalta Centre. There was an 8-1 victory during the 2015-16 season and the only player in that game who skated tonight was Tigers overage forward, James Hamblin. The Winterhawks also won at Canalta Centre the last time the team visited, scoring a pair of empty-netters to earn a 5-2 win in 2017-18. Current ‘Hawks forwards Jake Gricius and Mason Mannek scored in that contest for Portland…The Winterhawks, now 3-3 this season, burst out of the gate with three straight wins. However, on its current road trip through the Central Division, Portland dropped a 4-2 decision in Lethbridge, then a 5-2 verdict in Calgary…The Winterhawks will continue along the Trans Canada Highway to Swift Current, then double back through Red Deer and Edmonton before returning home to host the Brandon Wheat Kings on October 19…In light of the WHL’s unbalanced schedule, teams in the East and Central Divisions only host U.S. Division teams every second season. However, due to the relocation of the Kootenay ICE from Cranbrook to Winnipeg and the subsequent divisional realignment, Swift Current will host the Winterhawks for the second consecutive season…Portland arrived in Medicine Hat with a group of National Hockey League draft eligible players, based on the Central Scouting players to watch list published Monday. Seth Jarvis, Cross Hanas and Simon Knak have earned B-ratings, which suggest potential as second or third round selections. Jonas Brondberg and Robbie Fromm-Delorme earned C-ratings, projected as fourth, fifth or sixth round picks. Central Scouting will re-issue its rankings at mid-season.

Look for an upbeat interview online featuring Jarvis on The Pipeline Show later this week, as host Guy Flaming quizzed the Winterhawks young forward for his weekly podcast…Did you know that Portland was originally known as the “Winter Hawks” until May 2009. At that point in time, the organization issued a press release indicating “the space…announced its retirement” and the team was renaming itself the Winterhawks…Two U.S. Division teams are owned by Albert-based interests – the Winterhawks by Calgary-based businessman Bill Gallacher and the Everett Silvertips by Bill Yuill of Medicine Hat.

A veteran of more than 235 WHL games, he is a product of the Colorado Thunderbirds developmental program.  In recent years, the WHL has drawn a number of skilled players from the T-Birds, such as Cal and Nolan Foote (Kelowna), Max Gerlach (Medicine Hat/Saskatoon), along with current Portland forward Mason Mannek and the Tigers Bryan Lockner.

“Coming from Colorado, I was always pushed toward the NCAA,” Gricius said. “For me to come to the WHL, it was kind of random, to be honest.

“There was a U-14 regional camp in Colorado Springs where I’m from. And Mike (Johnston) and Matt Bardsley came to talk to me and they kind of drew me into the WHL. I know for me it was easy to come to Portland.

“I don’t know what other players want to do. But I think that me being here might have helped Mason come to the to the Winterhawks too, because I could kind of talk to him and tell him how it was. And you know, Lockner, playing against him tonight, he was on my line on the T-Birds.

“So, it was a fun experience with the Thunderbirds and like you said, there’s a lot of us in the WHL.”

History 101
Given the Tigers and Winterhawks reside in different conferences, the only way these teams will meet in the playoffs would be in the league championship final series. It’s happened only once, in the spring of 1987 when the Tigers won the league title with a seven-game decision over Portland. Medicine Hat went on to win the Memorial Cup and again the next season. 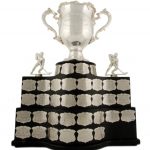 Both organizations have certainly had plenty of success.

The Tigers have won two Memorial Cups and five WHL league titles. The Winterhawks have won the WHL championship three times and the Memorial Cup twice, in 1983 and 1998.

For the Tigers, celebrating its 50th season in the WHL and the Winterhawks, which entered the league for the 1976-77 campaign, what’s the likelihood of meeting again in the WHL championship series this season? Let’s just say the odds would probably be very, very long.

However, according to the WHL website, the teams do share a nifty tidbit of history in the WHL Record Book. The fastest overtime goal ever scored in a WHL game was scored by Mike Lay of the Tigers, just six seconds into extra time against Portland on December 7, 1983. Medicine Hat won the game, 10-9. The record still stands – almost 36 years later.