The Winterhawks arrived in Red Deer ready to play and laid a beat down on the home side.

Portland netminder Joel Hofer was perfect in net, needing to make only 16 saves between the pipes as the Winterhawks shut down the Rebels offense all night long.

In a building that was hosting 90s night, it was the Winterhawks who came to the party dressed the part. The team put up 41 shots and five goals in a performance that can only be described as dominant.

In the early going, Red Deer was playing up to the tempo.

“We started off fine the first seven or eight minutes of the game. They got that first goal, and they got the second goal, then we started playing a lot of individual hockey and got away from our team game,” Rebels head coach and general manager Brent Sutter said.

It didn’t last as long as the team had hoped, as penalty trouble spelled disaster.

Shortly after Mason Ward served two minutes for delay of game, Josh Tarzwell found himself in the sin bin for goalie interference. The 4,006 fans in the building let it be known that they thought it was a soft call. Boos filled the arena.

Just 39 seconds into the ensuing power play, Seth Jarvis ripped an incredible shot by a screened Ethan Anders. It was first thought to have hit the crossbar outside the net and play continued. Eventually, the play was called, and the video review showed that Jarvis had opened the scoring.

“I think we had a couple of scrambles there in the offensive zone on the power play, and then I think it was Simon (Knak) got the puck on the wall and gave it to Johnny (Ludvig). He made a good fake to get them all drawn to the middle, got it to me, and Gricius laid a perfect screen to open up the short side for me,” said the night’s first star from the Winterhawks, Seth Jarvis.

With the seconds winding down in the first period, the wind was taken completely out of the Rebels’ sails.

While backchecking, Tarzwell dove to make a play on the puck as it was being played across the front of the 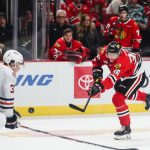 Rebels net. It caromed off his stick and into the chest of Simon Knak. The Swiss import didn’t have to do anything, and he had his third goal of the season.

The teams headed to the dressing room with the visitors out in front 2-0.

“Obviously, getting up on a team is key. This road trip, we kind of struggled at times, I thought, with our game. What we have been trying to do the last few games is just take pieces and add to them as we move along through a season with young guys. I thought our forecheck was good and our backcheck was good. those are the things we focused on tonight, to try to jump on their defense but be hard coming back, take away lanes, don’t give them much on the rush. We’re coming, but I know we have a ways to go,” said general manager and head coach Mike Johnston.

The second period saw more of the Winterhawks coming in waves as they continued a relentless forecheck.

With another Rebel in the penalty box, the Winterhawks capitalized again.

Portland captain Johnny Ludvig wired a point shot beyond a screened Anders and he had no chance to make a save. The lead was three goals, and the teams had a little over six minutes to play in the second period.

Before the period was out, the Winterhawks added another goal, this time by Clay Hanus. With all kinds of bodies in front of the net, again Anders had little hope in making a save.

The Winterhawks were not done with the Rebels despite a change between the pipes for the home side. Byron Fancy came into the night’s action to perform cleanup duties.

Fancy would not get by unscathed as the Winterhawks continued their pursuit of goals. They fired 12 shots at Fancy through the final 20 minutes.

Jake Gricius followed up a rush into the Rebels zone and put a puck at the Rebels net. Fancy made the initial save, but the puck bounced up high and in behind him into the open net.

“We had four or five shots after the first. I thought we just chased the game a lot,” said Sutter.

The line of Jarvis, Knak, and Newkirk combined for seven points on the night and certainly had more opportunities to fire home more pucks. With the win, the Winterhawks have won two straight following three consecutive losses to start the Central Division road swing.

“We’ve mixed up the lines a little bit over the swing through Alberta, and I thought the combination of Knak, who usually plays the right side but I had him on the left, with Jarvis and (Reece) Newkirk, I thought they were a good line and they’ve been a good line the last two games. They played well. I like the balance in our lines right now. We have a really young so-called third, fourth line but we’ve had balance,” said Johnston

The Winterhawks swept the three stars on the night and could have given the team more than the typical three. Jarvis was proud of the team’s effort throughout the night.

“I think our team played really well. I think we only gave up 16 shots, so defense was a big aspect of it. We played fast, played our game, and it showed,” said Jarvis.

Rebel Yell…The three stars in the building were Jarvis, Ludvig, and Hofer. Matthew Quigley led all players with 7 shots on net; Sakowich and Tarzwell had 3 each for Red Deer. Red Deer was 0-for-5 on the power play and allowed 2 goals on 5 penalty kills. This snapped a streak of 13 consecutive penalty kills and dropped the team from 90% before the game to 85.7%. Portland has scored 13 goals over their last 6 periods. Red Deer now heads to Medicine Hat for a Saturday night tilt with the Tigers — the puck drops at 7:30 PM. The Winterhawks have the day off before an afternoon matchup with the Central Division-leading Edmonton Oil Kings.

Home › Forums › Rebels shut out on home ice by Winterhawks