It’s become very apparent that the Edmonton Oil Kings are pleased to be back at Rogers Place after their ten-game BC road trip. After beating the Calgary Hitmen 5-4 on Friday night, the Oil Kings continued to gain momentum as their offence came alive once again, putting seven goals by the Regina Pats.

Edmonton put its depth on full display with 11 different players making an impact on the box score.

The scoring began early in the first period. The Oil Kings forecheck put intense pressure on the Pats defencemen, causing a couple of desperation passes which soon resulted in a 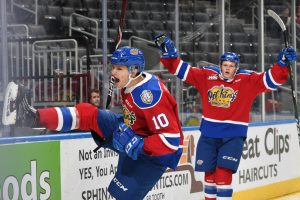 turnover. Jalen Luypen capitalized, netting his first of the game from the slot to make 1-0 Edmonton. The Kelowna, BC, native added a second midway through the third period.

Rookie forward Tyler Horstmann had a career game. The Richmond, BC native put together a three-point performance and scored his first goal of the season. His two assists came in familiar fashion with two centering passes tucked in by Dylan Guenther and Vladimir Alistrov. Before today’s offensive outbreak, Horstmann only had two career points in 22 games for the Oil Kings.

Ethan McIndoe and Carter Souch also got their names on the scoresheet with their fifth and ninth goals of the season respectively. Josh Williams didn’t score on the night, but he did pick up two assists to bring his point total to 29 this season. 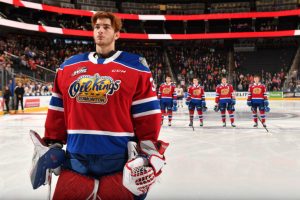 Despite allowing 33 shots on goal, the home team did a great job limiting the Pats’ grade-A opportunities. However, when called into action, superstar rookie goaltender Sebastian Cossa answered the call. His highlight save came in the second period. A bad change by the Oil Kings blueliners gave Carson Denomie a clear breakaway chance, but he was denied by Cossa.

The Oil Kings did concede one goal. After initially stopping the original two shots, Robbie Holmes jammed away at the loose puck, knocking it by Cossa for Regina’s lone goal of the contest.

Following the action on the ice, Jalen Luypen, Tyler Horstmann, and Vladimir Alistrov were named the three stars of the game. Luypen had two goals, while Horstmann and Alistrov each had a goal and a pair of assists.

Next up, the Oil Kings stay on home ice for a midweek game vs the Moose Jaw Warriors on Tuesday night.