At 16 years old, Orca Wiesblatt was nearing on top of the junior hockey world. He helped the Brooks Bandits capture the Alberta Junior Hockey League title and came within one goal of winning the franchises’ second Royal Bank Cup. Despite all the team success, Wiesblatt wanted something different.

Growing up in Calgary, Wiesblatt attended Calgary Hitmen games as a kid, dreaming of one day suiting up for the Western Hockey League club.

Those dreams seemed dashed after going undrafted in the 2015 Bantam Draft. That story changed a week ago when he was evaluating his future with the people closest to him.

Last season, Wiesblatt only appeared in 30 of the Bandits’ 60 games, where he recorded six goals and 12 points. He only played in one game with the Bandits at the RBC Cup and managed to rack up 12 penalty minutes, as the Bandits eventually lost 3-2 in overtime to the host Cobourg Cougars in the title game.

Returning for a second year in Brooks, Wiesblatt got off to a solid start with the Bandits this season. Appearing in 16 games, the Calgary product already matched his career high in goals and was one point shy of his total from last year.

+“I talked about things with my family and my family advisor and we agreed that a path in the NCAA wasn’t for me. I wanted more exposure and to play against the best competition possible. We decided that the Western League was the best choice for me,” said Wiesblatt, who is the second oldest of five siblings, where each name begins with an O. “My agent reached out to Dallas Thompson and they figured it out from there. Brooks was the top AJHL organization, but playing with the Hitmen is where I wanted to be. I also heard nothing but good things about the Hitmen and knew they were an amazing organization as well.”

He also has bloodlines in the WHL, as his younger brother Ocean, was the 25th overall pick by the Prince Albert Raiders in the 2017 Draft.

Bandits General Manager Ryan Papaioannou didn’t seem thrilled about Orca’s decision to leave and declined to comment for the story. He wanted to remain neutral, stating he had nothing positive to add.

Orca’s decision means that he will forfeit his opportunity to attend and play for the University of Vermont Catamounts. The decision to embark on a WHL career comes just over two weeks after committing to Vermont where his brother Ocean is slated to attend.

The 5-foot-11, 165-pounder comes to the Hitmen following centreman Lucas Cullen’s (1999-born) decision to return home to the Okanagan to play for the West Kelowna Warriors of the B.C. Hockey League after seven games with the Hitmen this season. 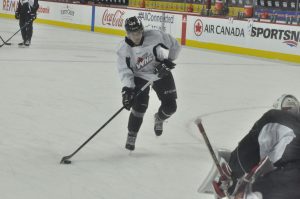 The Hitmen wasted no time in getting him acclimated with his new teammates; after scoring one goal in a 7-0 blowout win over the Lloydminster Bobcats Oct. 25, Orca was in the lineup alongside Huber and Gurney two nights later when the Hitmen lost 5-4 in Lethbridge to the Hurricanes.

His first game with the Hitmen was the first time he stepped on the ice with his new teammates, which was a difficult transition for everyone involved.

“We wanted to make him feel as comfortable as possible. We haven’t fully thrown him to the fire yet and we have kept his shifts to a minimal at the start as we see what he brings to the table,” said Ferguson. “It was good to see him work this week at practice as we get to know him a little bit better, introduce him into our systems and let him know how we want to play.”

So far, in two games, the right-handed winger has not found his way onto the score sheet.

Helping him get acclimated in his new environment was an old teammate.

Back in the days of bantam hockey, defenceman Andrew Viggars shared a locker room with Orca when they both played for the Calgary Bisons of the Alberta Major Bantam Hockey League in 2014-15.

“I was really excited when I heard the news; I texted him right away and I was happy to see him at the rink. He’s a great guy with a great skillset. He’s going to bring a solid offensive game once he gets comfortable here. You won’t see him shying away from any scrums after the whistle, either,” said Viggars.

In 29 games with the Bisons, Orca registered 14 goals and 24 points. That spring, he and Viggars were named to Team Calgary South. Held pointless until the final, Orca netted a pair of goals in the 4-3 comeback win over Huber and Team South.

“We are happy to have him. He fits into our 2000-age group well and we think he can add stuff into our lineup this year and moving forward. He’s played for good programs and in big games. Those kind of things don’t hurt, either,” said Hitmen General Manager Jeff Chynoweth.

Picking up another team’s structure won’t be the most difficult thing Orca has been required to do. The newest member of the Hitmen is fluent in two languages, English and sign language. He learned to use sign language before he could talk; seeing as both his parents are deaf. Learning new breakout systems or defensive assignments doesn’t seem difficult when compared to other challenges he has overcome in his young life. Like most things, Orca just needs a little time.

“The tempo is way faster up here. Guys are bigger and have more skill. I’m just listening closely to the coach and picking up anything I can, and then going out and trying to make it happen on the ice,” said Orca.

Conveniently, Orca’s next two games comes against one of the two teams he’s already faced this season, as the Hitmen entertain the Hurricanes in a home-and-home series this weekend starting Friday night in Lethbridge and wrapping up Saturday night (7 p.m.) at the Scotiabank Saddledome. Going up against a defence and a forecheck that he has already witnessed might help the migration to life in the WHL.