It is an inevitable part of his short-term future — questions about the hockey dynamics that have firmly entrenched the family name on the Western Hockey League landscape.

Yet the insightful and animated 16-year-old defenceman from Okotoks, Alberta, seems to take it all in stride these days. 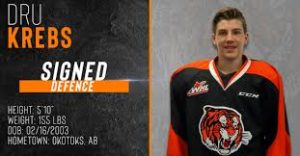 Dru Krebs, who is attending his second training camp with the Medicine Hat Tigers, appears motivated to stick around the Gas City this season.

“It’s fun, you’re with the guys again,” Krebs offered, when asked about the vibe heading into the weekend sessions at the Canalta Centre. “It’s nice to see some familiar faces and some new faces. But now it’s time to get your mojo back and get back into the groove of the hockey lifestyle.”

The Tigers signed Krebs on June 3, 2018, about a month after making him the 38th overall pick with their second-round selection at the WHL Bantam Draft. The 2019-20 campaign marks his first season of WHL eligibility, and he is keen on making the most of his current audition.

“Of course, I want to come here and make the team,” Krebs said. “I’m just going to put as much work ethic and everything into every single game and every chance to make an impression for them to keep me on the team.”

The Tigers graduated a pair of key defencemen at the end of last season — Dylan McPherson and Swedish import Linus Nassen. The overage players in camp right now are all forwards, which suggests the Tigers may be a bit thin on the back end out of the gate. Barring any trades or surprise signings, a youngster or two joining the blueline brigade this season may not be out of the question.

Krebs comes across as a young man not afraid to engage in conversation.

“I think my skating really stands out and then my puck-moving ability,” Krebs said when asked for a brief self-evaluation. “But, as an individual, I think my defects are in the defensive zone against the bigger guys.

“I’m only 5-foot-11, so I’m gonna have to handle guys like my brother and really defend against those guys.”

Dakota Krebs, 20, is a 6-foot-4, 210-pound defenceman with the Calgary Hitmen. The right-handed shooter — an assistant captain last season — has appeared in 259 WHL games, including playoffs, with the Hitmen and Tri-City Americans.

Peyton Krebs, 18, is a 5-foot-11, 180-pound forward with the Winnipeg ICE. In June, Peyton was selected in the first round, 17th overall, at the NHL Entry Draft by the Vegas Golden Knights. Entering his third full WHL season — the first two played in Cranbrook for the Kootenay ICE — he has appeared in 137 WHL games.

“Just growing up with them, they’ve taught me enough,” Dru acknowledged.

“I think they know that they’ve taught me throughout my life, what they want me to do.

“I’ve seen them go through the process. It’s really allowed me to know what to expect.”

And for the record, Dru checks in at 5-foot-10 and 155 pounds. So the questions begs, where did Dakota get his height?

“I don’t know,” Dru joked, “my dad says to my mom all the time, like, what are you doing? But we’ll see here. They’re like, I might have a few inches left to grow, too.”

For a while, it looked to be set up for each of the Krebs clan to play in the Central Division, assuming that Dru would make the grade in a Tigers jersey during this season, with Dakota in Calgary for his 20-year-old campaign. But during the off-season, the Kootenay ICE relocated to Winnipeg, which means Peyton will see more of the East Division this time around.

Dru admits he would dearly love to face off in the WHL against his big brothers.

“I’m just focused right now on making the team,” Dru said. “But once that opportunity emerges, I’ll really enjoy it. And it’ll be a cool experience.”

Dru has never faced his brothers competitively, although Peyton and Dakota have crossed paths in the WHL.

“But, my dad does conditioning camps every summer, so we do little competitions here and there and see how we battle against each other. It’s always been good fun.”

The 2019 calendar has been exciting for the entire Krebs family, as each of the boys fashion their respective hockey road maps. However, there was one speed bump – a training injury Peyton suffered prior to the NHL draft.

The experience has not been lost on Dru — the opportunity to watch his brother take on the rehab, the challenge to recover from the injury.

“Well, as just a bystander towards it, I really respect how much work ethic he puts into it,” Dru said of Peyton. “A lot of guys after they get injured might just go on the couch or something.

“But Peyton is so determined and so focused that he’s constantly working and trying to get better. He’s going to rehab every day. He’s going and working out every other part of his body so he can stay at the pace that everyone else is, even though he’s without one leg.”

Seems like that makes your brother a heckuva role model, eh?

“Yeah, it does,” Dru said. “Like, both my brothers have been such big role models in my life, and it’s unreal to be able to follow in their footsteps.”

Home › Forums › Dru Krebs: All in the family