MEDICINE HAT – It has become somewhat customary so far this season for the Medicine Hat Tigers to suit up at Co-Op Place with a just little extra motivation.

On February 27, the team was fired up as radio play-by-play legend Bob Ridley was calling his 4,000th career game. The Tigers responded with a resounding 7-2 decision.

On Saturday, it was a huge night for rookie netminder Beckett Langkow, who started his first Western Hockey League game. His team mates responded with an effort that led to a hard-fought 4-2 win over the Calgary Hitmen.

“I think I had a bit of a rough start there,” Langkow said following the victory. “It felt kind of weird the first five minutes because I haven’t played a game in almost a year. So, the first bullet kind of woke me up a bit and then I felt good after that.”

The coaching staff rested Garin Bjorklund, who had made five straight starts, including a 39-save performance Friday in the Tigers 6-2 win at Calgary.

Langkow, as poised and calm after the game as he appeared during the contest, was excited to get the nod.

“It’s been a long week and I’ve been here for over a month already and had lots of practices,” he said. “I’ve just been getting better and better and getting used to the speed and the shots here.

“And you know, it helps having Garin, he’s a draft pick and great guy and he really pushes me to compete in practice and it just makes me better. He’s also a great friend.”

The visitors applied early pressure, peppering Langkow with six shots in the first three minutes. One of those wound up behind the rookie keeper, a rude awakening just 58 seconds in. Tyson Galloway sifted a shot from the point through traffic that Langkow was able to block, but Josh Prokop beat three Tigers defenders to the rebound and slid the puck home.

A Calgary interference penalty in the attacking zone put Medicine Hat on the powerplay and 34 seconds into the man advantage, the Tigers evened the score at the 2:40 mark, without even directing the puck on the Hitmen net.

Defenceman Eric Van Impe controlled the puck deep in the Calgary zone, moved out of the corner and his centering pass deflected over the goal line off the leg of Hitmen defenceman Jackson Van De Leest. It was Van Impe’s second tally of the season and the Tigers were credited with their first shot of the contest.

The Hitmen outshot the hosts 13-9 in the opening frame and controlled territorial play. However, the Tigers have quick-strike capabilities and created a couple of high-percentage scoring chances. But Calgary goaltender Jack McNaughton, making his 79th career regular season start, held steady and stoned Tigers forward Nick McCarry from in close, shortly after turning away rookie Cayden Glover on a breakaway.

For his part, Langkow recovered well from the early onslaught, making 12 consecutive saves. The 6-foot, 175-pounder calmly directed pucks to the corners and stood tall amid heavy traffic in his crease.

The Tigers took the lead at 7:48 of the second stanza with another power play tally. Daniel Baker took a pass from Dru Krebs and drilled a shot toward the Hitmen cage. The puck appeared to bounce in off Van De Leest again. McCarry, who was creating havoc in the crease, was credited with the goal, his second of the campaign.

The Tigers had a great chance to extend the lead when Noah Danielson picked up a loose puck in the neutral zone while on the penalty kill. The speedy Danielson beat McNaughton with a backhand deke but couldn’t solve the goal post.

With 37 seconds remaining in the period and the Tigers on another power play, Cole Clayton scored on a broken-stick, change-up, slap shot along the ice from the blueline that fooled McNaughton. It was Clayton’s fourth goal in two games against the Hitmen, his fifth of the season and 12th point, good enough to vault the Tigers defenceman to the top of the WHL scoring derby.

Clayton, who also added an assist, has been on a tear offensively this season with six points on the power play and six at even strength.

“It’s a little weird, I’ve never really had this kind of luck,” Clayton said. “But, you make your own luck and I think I’ve been putting work in at practice. I’ve been getting good looks.”

Assistant coach Joe Frazer is thrilled for Clayton and his fast start.

“It’s great to see, he’s been a Tiger his whole life,” Frazer said. “He’s put in a ton of work. You know, it was obviously challenging and you have a year off, but he made the most of it and he’s getting rewarded.

Penalty trouble appeared to put the Tigers on the defensive midway through the third period and the Hitmen were able to mount a comeback. The Calgary powerplay kept the Tigers hemmed into the defending zone and the pressure finally paid off.

Zac Funk pulled the Hitmen within one at 7:34 when he corralled a loose puck high in the slot and beat Langkow low glove side. It was Funk’s first WHL goal and came at the tail end of a Hitmen power play, just two seconds after the Tigers had killed off a slashing minor to Dru Krebs.

The Tigers sealed the verdict when Krebs made a nifty outlet pass to McCarry in the neutral zone and the diminutive forward deposited the puck into the empty Calgary cage with 54 seconds to play.

The Tigers travel to Calgary Sunday to complete the three-in-three weekend with the Hitmen. Puck drop at the Seven Chiefs Sportsplex is 7:00pm. Medicine Hat has the bye next weekend and will return to action Friday, March 26 when the Highway 3 rival Hurricanes come calling to Co-Op Place.

Ice Chips…Three stars were Langkow, Clayton and Van Impe…Van Impe collected three points on the night…Krebs chipped in with two assists…All told, Tigers defenceman accounted for eight scoring points…The Tigers outshot the Hitmen, 36-33…Langkow finished with 34 saves, while McNaughton made 30 stops…Medicine Hat was 3-for-4 on the power play, while Calgary went 0-for-4… 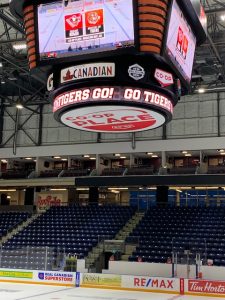 Lukas Svejkovsky did not play, nursing an upper-body injury from the game Friday. It is not known if he will play Sunday in Calgary…The Tigers are have four wins in six games…The signage is beginning to take shape in Medicine Hat as Co-Op Place is taking on the look of it’s new name sponsor. The facility had been known as the Canalta Centre since it opened prior to the 2015-16 season…For the second night in a row, the Wiesblatt brothers faced off against each other. Oasiz, who will celebrate his 17th birthday in early April, appeared in his sixth career game for the Tigers. Orca, now 20, played in his 126th WHL game. Neither is lacking in the grit department…The other brother act on the night was Josh (21) and Luke Prokop (18) of the Hitmen. Luke signed an entry level contract with the Nashville Predators in December…Elsewhere in the Central Division, the Hurricanes scored three unanswered goals, including the overtime winner, to dispatch the Red Deer Rebels, 4-3.