He grew up listening to the great Danny Gallivan call Montreal Canadiens games as a youngster, and today Bob Ridley still credits the Hall of Fame voice of the Canadiens for planting a seed that grew into his love for hockey and passion for broadcasting.

“My hero was Danny Gallivan,” Ridley recalled. “I used to listen to him very intently even though I wasn’t a huge Montreal Canadiens fan. It was just the way he called hockey games.”

When Ridley first became interested in broadcasting, he enrolled in the radio and TV arts program at Mount Royal College in Calgary and started doing some play-by-play in midget hockey. He sent Gallivan a tape, which he critiqued, offering this advice.

“He told me, ‘Hey, if you’re that interested in hockey play-by-play, go do it some place,’” Ridley said.

Today, Bob Ridley is in his 50th season as radio play-by-play broadcaster for the Medicine Hat Tigers. He is as synonymous with Tigers hockey, and has served the same role in the lives of generations of Tigers fans, as Gallivan did during his iconic 32-year career with the Canadiens.

The first hockey game that Ridley called was an intermediate level game in Swift Current, SK, a few years before he landed a sports reporter position in Medicine Hat in 1968.  Ridley then called games in the Western Canadian Senior Hockey League before Medicine Hat’s Memorial Gardens burned down in the winter of 1968, leaving the city without hockey for a year. 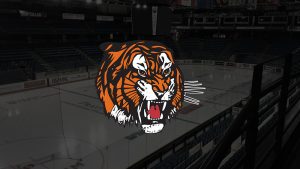 When the Medicine Hat Arena was constructed, the city was granted a franchise in the Western Canada Hockey League, now the WHL, which would begin play as the Tigers in 1970-71. Since that time, Ridley has been on the call for all but one of the franchise’s games.

Ridley was also the Tigers’ full-time bus driver for 43 years. Even though he has stepped away from his full-time driving duties in recent years to focus solely on broadcasting, he still chips in as a relief driver on occasion.

Yes, Bob Ridley is a man of many talents who has worn many hats and seen as much or more than anybody in his superb career. But spend a few minutes with the man, and you’ll understand for yourself the deep respect he has earned across the sport of hockey, in particular from his peers.

“The word ‘legend’ is thrown out loosely sometimes, but Bob Ridley is a hockey legend in every way, professionally, and especially personally,” said Peter Loubardias, colour commentator on Calgary Flames radio broadcasts, who himself has deep roots broadcasting junior hockey.

Serving as both broadcaster and bus driver presented the rare opportunity to form unique bonds with the teams that he has called games for.

“Driving the bus led to deeper relationships with the team,” Ridley said. “Of course, they never heard my play-by-play, but on the bus, we got to know each other very, very well. They learn to trust you and consequently, sometimes they’d come up and chit chat with you, so I developed some very good relationships that way,” he said.

Ridley continued, “A lot of these kids are away from home for the first time, so they’re a little bit lonesome, maybe looking for a big brother figure or a father figure because they want to get a little bit of guidance and want your take on certain things,” Ridley said, adding that there is always the implicit understanding that all of these conversations stay between himself and the player. “What’s said on the bus stays on the bus. You develop a rapport with the players and they begin to trust you that way,” he said.

While he enjoyed the dual role very much, Ridley admitted that it did increase the challenge.

“It made it harder because you had to be so organized,” Ridley began. “I’m not the most organized guy in the world, but I was able to make it work. There was a time when you had to do your bus thing, making sure it was fuelled up and the tires were up and everything else. And then you have to make sure that everything is in order as far as the broadcast is concerned.  There were some busy times, no question, but for a long time I was able to make it all work,” said Ridley, recipient of the WHL’s Distinguished Service Award in 2007.

Ridley has seen generations of players mature as young men while wearing the Tigers sweater, and then go on in life, some making their way in the NHL and professional hockey, and many in other walks of life.

The same can be said for the coaches he has worked beside. Right at the top of that list for Ridley and Tigers fans alike is Willie Desjardins, who returned to the club as head coach and general manager this season, having served previously as Tigers head coach from 2002 to 2010. After that stint, Desjardins headed to the NHL as an associate coach and AHL head coach with the Dallas Stars before head coaching stops with the Vancouver Canucks and Los Angeles Kings.

When Desjardins returned to Medicine Hat — although now taking up office at the Canalta Centre, which opened for the beginning of the 2015-16 season when the Tigers moved on from the venerable Medicine Hat Arena, which had served as the Tigers first and only home since their inaugural 1970-71 season — Ridley said it felt like they basically picked up where they left off.

“Willie is such an outstanding individual and a great hockey person, and we’re just so tickled that he decided to come back to Medicine Hat,” Ridley said of the native of nearby Climax, SK, adding that Desjardins is “somewhat of a hometown boy.”

Ridley explained that he and Desjardins share a deep mutual respect and a strong working relationship.

“He’s like a big brother to me, or a little brother depending how you want to look at it,” Ridley said of Desjardins, who played with Moose Jaw and Swift Current of the SJHL before playing two seasons in the WCHL with the Lethbridge Broncos (1975-77).

“You’ve got to respect each other, and nobody has more respect than I do for Willie Desjardins. You’ve got to stay out of his way when he’s busy and let him do his thing, and he does the same for me,” Ridley said. “It’s got to be that way for us to be a real team.”

Though Ridley is aware that he is due to reach his next major milestone — game number 4,000 — later this season, he doesn’t have the date circled on his calendar.

“I really don’t have the date circled, because if I start doing that, I might jinx it and I might never reach it, so I’ll just take it one game at a time,” Ridley began. “I didn’t really realize until about two years ago that 4,000 was getting close, so I felt like what the heck, let’s try to make it happen,” he said.

Because of his deep connection to the Tigers, some don’t realize the multi-sport versatility that Ridley has in his broadcasting tool box.

“Hockey was number one for me growing up and baseball was number two,” Ridley said. “I competed in all kinds of sports growing up, but those were my favourites for sure,” he said.

An inductee into the Alberta Sports Hall of Fame in 2000, Ridley called baseball play-by-play in Swift Current prior to arriving in Medicine Hat. This helped open the door for him to become play-by-play voice of Medicine Hat’s minor league ‘rookie’ classification baseball franchise, which was initially affiliated with the Oakland Athletics in 1977 before partnering with the Toronto Blue Jays for the rest of the team’s existence, which lasted until 2002.

Ridley had his familiar dual role as play-by-play broadcaster and bus driver for eight seasons beginning in 1977.

“I really enjoyed Pioneer League baseball. It was really competitive — lots of travel of course,” Ridley recalled fondly. “Busy all winter and busy all summer, so it felt pretty good.”

Ridley still attends games of the Medicine Hat Mavericks, the baseball team that moved in to Athletic Park in 2003 and established itself as a highly successful franchise in the summer-collegiate Western Canadian Baseball League.

“(Mavericks owner and former Medicine Hat Blue Jay) Greg Morrison has done such a marvelous job in Medicine Hat with the Mavericks, and I go to as many games as I possibly can,” Ridley said. “My wife and I do quite a lot of camping with the motor home and I do a lot of motorbiking as well, so my summers are pretty busy, but I watch as much baseball as I possibly can.”

Much like the great Danny Gallivan did for him when he was a wide-eyed young broadcaster, Ridley now critiques broadcast samples for a small number of promising play-by-play voices.

“I tell broadcasters ‘if you’re interested in it, keep at it’,” Ridley said, sounding much like the hero of his youth, Gallivan. “The trouble is that there’s not too many openings, so for a young broadcaster, you have to be a little bit lucky, but I tell them don’t give up and keep working at it and maybe your chance will come,” said the 2019 Hall of Fame inductee at the Alberta Hockey Hall of Fame and Western Association of Broadcasters.

Ridley offered his perspective on the ever-growing list of honours, awards, and accolades he has accrued throughout his career, which are headlined by inductions into three Halls of Fame.

“It’s marvelous, and I’m very proud that all the people that have nominated and selected me to the different awards feel so deeply that I deserve it, but to me, I’ve done this work for 50 years, and it’s just a treat that I’ve been able to do it for this long and I’m very thankful and blessed,“ he concluded. “The Hall of Fame awards and such are just the icing on the cake.”

Ridley credits his original inspiration, Danny Gallivan, for being the one to get him going and keep him going in the game of hockey. There are surely many people today, broadcasters and otherwise, who will say that Bob Ridley has done the exact same for them.

Yes, sir.  You can be very happy, indeed.