With the upcoming World Juniors scheduled to start in the next few weeks, it is time to look back at the Vancouver Giants’ performances at the tournament.

Bondra played with the Slovakian National Team twice at the World Juniors, but similar to Musil was traded before his second tournament appearance. Bondra recorded one goal in five games during the tournament. Slovakia made it to the quarterfinals before getting knocked out by Sweden.

The Slovakian forward did not have the best tournament but helped his team avoid relegation in the tournament. He registered one assist. After the tournament, Bliznak returned to Vancouver where he played a key role in the Giants’ Memorial Cup win. His performance lands him at number 14.

Although Musil was born in Calgary, he plays under the Czech flag for international tournaments. What is also important to note is that although he played in the World Juniors twice, he was only a Giant for one year as he was traded before the 2013 tournament to Edmonton. Musil played five games in the 2012 edition and was a key defender for the Czechs. He did not record any points but was used as a shutdown guy on their way to a fifth-place finish. The big defenseman had a good tournament and ranks 13th on the list.

Roman had a good performance in 2018 for a Slovakian team that made it to the quarterfinals. In five games, Roman scored twice which both came in a 5-1 victory versus Denmark. Roman had played in the World Juniors the year before, but this was his first tournament while playing for the Giants.

A year after raising the Memorial Cup, Blum was named to the US World Junior Team. During the tournament, Blum recorded one assist in six games. The US lost to Russia in the bronze medal game. Blum played key minutes for the team but was unable to win a medal that season.

McArdle from Burnaby BC was a key acquisition for the Giants on the way to their Memorial Cup win. Just like Franson, McArdle was named to Team Canada and helped them claim gold in Sweden. Although he did not register any points in the tournament, McArdle played every game on the stacked Canadian roster. His gold medal performance puts him in the top 10.

The pride of Sicamous donned the Maple Leaf once at the World Juniors. The same year he raised the Memorial Cup on home ice, Franson helped Canada take home their third consecutive Gold Medal at the World Juniors. Although he did not play a lot, Franson played every game for the Canadian Team and even assisted on Jonathon Toews’s game-winning goal.

Although Slovakia did not have a great tournament, Meszaros was impressive scoring three goals and adding an assist in six games. This was the big defenceman’s second World Juniors, but first as a member of the Giants. Meszaros would go on to register 41 points in 59 games that season with the Giants before making the Ottawa Senators the year after.

AFTER 40 | Kazakhstan gets its first goal of the game from #15 Artur Gatiyatov. Slovakia extends its lead over Kazakhstan 9-1 with goals from #27 Andrej Kollar, #25 Milos Roman and #15 Pavol Regenda. Shots were 29-11 in favour of 🇸🇰. #WorldJuniors pic.twitter.com/IowTVzigtB

In 2019, Roman scored three goals and contributed one assist in his five games with Slovakia. Roman recorded a goal in his team’s quarterfinal defeat against Russia. This was Roman’s third tournament, and second as a Giant.

Byram was solid for Canada in last year’s tournament, helping them capture gold in the Czech Republic. Although Byram only registered two assists in seven games, his presence on the blueline was key to the Canadians success. Byram played over 22 minutes in the gold medal game and assisted on Canada’s second goal.

Tvrdon was named to Team Slovakia the same year he put up 74 points in 60 games for the Giants. Although they lost in the fifth-place game, Tvrdon had a decent tournament with three goals and four points in six games. The big winger lands a spot in the top five.

Blum was named team captain of the US World Junior Team for the 2009 tournament. This was the same season that Blum served as captain of the Giants. Blum delivered in the tournament putting up two goals and two assists in six games. Unfortunately for Blum, the US finished fifth in the tournament. Blum was a steady force on the backend for the US team and was called upon to play big minutes against the hardest matchups. Blum’s second tournament puts him into the top five. 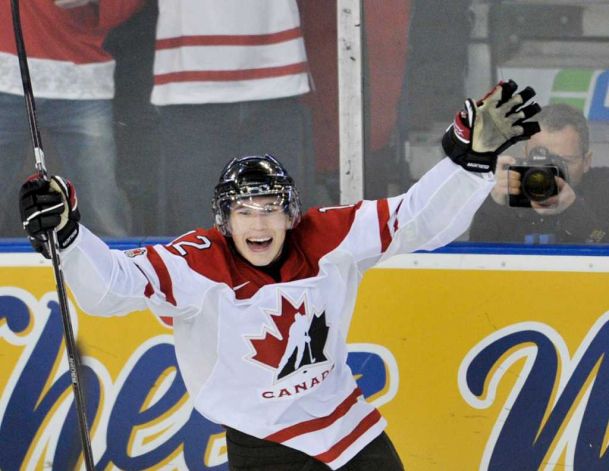 (Photo provided by the Vancouver Giants)

Gallagher was named to Team Canada the same year he served as captain of the Giants. In six games, Gallagher registered three goals and three assists on his way to a bronze medal. Gallagher’s top moment came against Russia in the semifinals where he registered a goal and two assists in a 6-5 loss. Gallagher was still able to skate away with a bronze which is why he ranks third on this list.

Kane notched two goals and four assists in six games on his way to a Gold Medal for Team Canada. This was Canada’s fifth consecutive gold at the tournament. Although he did not score in the gold medal game, Kane had two assists versus Russia in the semifinals. The semifinals versus Russia may go down as one of the greatest games in Team Canada history as fellow WHLer Jordan Eberle scored with five seconds left to send the game to overtime in front of a sold-out crowd in Toronto.

During his one season with the Giants, Schwarz had a record of 26-24-4 with a 2.67 GAA and .900 save percentage. During this season, he was also named to the Slovakian junior team for the second of three opportunities. Schwarz led the tournament with a .925 save percentage in six games. Schwartz went 4-2 in the tournament on his way to winning a bronze medal. Schwarz was named Best Goaltender of the tournament for his efforts. Some of his highlights during the tournament included shutting out Finland in the quarterfinals and stopping 39 of 42 shots in a semifinals’ loss to a powerhouse Canadian team that included Sidney Crosby, Patrice Bergeron, Shea Weber, Corey Perry, and Ryan Getzlaf. Although he only spent one season with the Giants, his world junior performance was unforgettable.