When asked to describe his five-year WHL career to this point, Tyler Preziuso kept it simple.

“Probably fast,” he said with a grin.

“It went by super quick, but I enjoyed the ride the whole time,” the Victoria, BC, native added.

The Vancouver Giants kicked off 2020 with a 1-0 loss on New Year’s Day at the hands of the rival Victoria Royals at the LEC.

Not only was it the Giants’ first game of the calendar year, but it was also Preziuso’s 300th regular-season game in the WHL, with 293 of them played with the Medicine Hat Tigers.

The Tigers originally drafted him in the third round (61st overall) in the 2014 WHL Bantam Draft — not necessarily the range you would expect to come out with a five-year player. 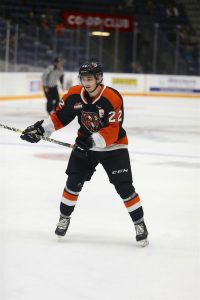 “I didn’t really think too much about it (getting this far) after the draft,” he said. “I was kind of leaning towards the BCHL, but I got a shot in Medicine Hat and took advantage of that. Never would have imagined the career I’ve had but its been great.”

After scoring a combined 25 goals in his first three seasons, Preziuso broke out for 21 goals and 50 points as a 19-year-old. So far this season split between Vancouver and Medicine Hat, he is at 14 goals.

Giants general manager Barclay Parneta swung one of the league’s bigger trades this season one month ago that saw longtime Giant Dylan Plouffe and 18-year-old Lukas Svejkovsky go to Alberta with defenceman Trevor Longo joining Preziuso in the Lower Mainland.

The trade also involved multiple picks, including a first-rounder to Vancouver for the upcoming draft.

He has left an impression on his new coach Michael Dyck early on, both on and off the ice, with six points (5G, 1A) in nine games with Vancouver.

“On the ice, he brings a lot of speed. He doesn’t take shifts off and works extremely hard,” said Dyck. “Off the ice, he’s a character guy. He’s mature and has been around the league a long, long time and he’s really good for our younger guys.”

Two of those goals came in his debut during the Giants’ Teddy Bear Toss game on December 8th, one day after being acquired.

Preziuso played on some good Tigers teams, including back-to-back division champions in 2016/17 (51 wins) and 2017/18 (36 wins). When asked about his team highlights of his career, he was quick to answer.

“One of the years (2017) we won the Central Division, we had a great team and everyone bought in. We didn’t get the result we wanted in playoffs but to get that banner felt real nice,” he said.

Medicine Hat saw a second-round exit in 2017 and a first-round loss the following season.

For a personal highlight, it’s an obvious choice for the forward who turns 21 later this month.

“My first goal sticks out. It was the game before Christmas. Tapped in a greasy one and I’ll always remember that,” he recalled.

A lot has to go right to last in this league for as long Preziuso has.

He currently is the active leader in the WHL for games played, now sitting at 302, just two ahead of his longtime teammate in Medicine Hat and current captain James Hamblin who just reached the 300 game plateau himself. Hamblin leads the WHL in points with 60 as this article is written.

When asked what attributes to such longevity, he was not hesitant to hand out praise to others.

“Definitely some of the people in Medicine Hat who helped me so much and gave me opportunity, guys in the summer that helped me with the skates and the workouts,” he said about those who have helped get him to this point. “Also the coaches I’ve had over the years and most of all my parents,” he added.

On the topic of parents, they are always the biggest MVPs for an up and coming hockey player. The early morning practices, the out of town tournaments, academy hockey expenses — getting to this level doesn’t happen without the support of parents and family.

That applies to the Preziuso family as well, who Tyler gives his biggest thanks and gratitude towards.

“My parents for all the extra work they do — they’ve been huge for me my whole career and I can’t thank them enough,” he said.

In the final months of his junior hockey career, the “super vet” will be a big and important piece as the Giants fight for a playoff spot in an ever so potent BC Division.

As it stands on January 8th, Vancouver has a firm hold of the first Wild Card spot in the West, five points ahead of Seattle with a game in hand. As for the divisional race, the Memorial Cup host Kelowna Rockets are seven points ahead of the Giants with two more games played and sitting in third.

Vancouver travels down south on Friday to take on the Spokane Chiefs before both teams head up to the Langley Events Centre to conclude a home-and-home.

Both teams will be getting massive boosts in their lineups as the Giants have Bowen Byram and the Chiefs have captain Ty Smith both returning from winning a gold medal with Team Canada at World Juniors in the Czech Republic.

The Giants went 3-5 while Byram was away while the Chiefs were 4-4-1-1 without Smith.