Mazden Leslie is slowly becoming a fan favourite in Vancouver. The 16-year-old rookie defenceman has five goals in 11 games so far and is developing into a serious offensive threat from the blueline. Leslie, who was selected 10th overall by the Giants in the 2020 Bantam Draft, is already looking like the steal of the draft. He can move the puck, find open ice, and is not afraid to lay the body. If he continues this progress, he will be a can’t miss prospect at the 2023 NHL Entry Draft.

Leslie has made a solid transition to the WHL this season. He is playing against faster and bigger players this season, but that has not fazed him. “I think the first couple of games it was about getting used to the speed and size,” said Leslie. “Now it’s just getting back to playing hockey”.

Leslie is a very confident player, especially when he has the puck on his stick. He is taking shots, getting into the play, and continues to improve game after game. Once Leslie gets more games under his belt, especially against different teams outside the BC Divison, we will continue to see that confidence grow.

Leslie is what is considered a modern age defenceman. He gets to the net and can produce offensively rather than hang at the blueline releasing a slapshot. Leslie tries to model his game after some star players in the NHL and hopes he can reach that level one day. When asked, Leslie mentioned two players specifically.

The 2005-born dman loves to score goals and transition the puck. Puck control from multiple body angles + fakes, freezes forecheckers and allows Mazden to open up passing lanes and space for teammates. Simple details do a lot here. pic.twitter.com/z5lldLEz1i

“Erik Karlsson from back in 2016. Also Miro Heiskanen. Guys like that.” Leslie has already shown he has the talent and awareness to play at a high level. Giants fans will be hopeful he can unleash his inner 2016 Karlsson in the coming years and play at an elite level like that.

Goals for the season and offseason

Leslie is still a very young player who is adjusting to the WHL. During this season and the offseason, he pointed out three areas that he wants to improve to take the next step in becoming an elite WHL defenceman. 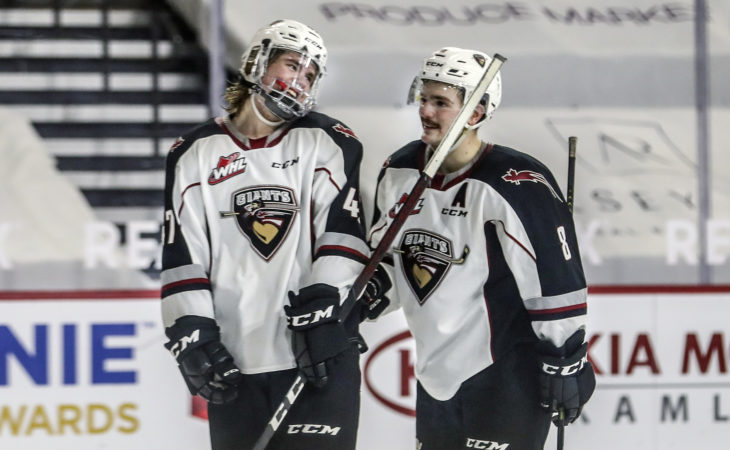 “Getting faster, working on my shot, and my defensive play.” The defensive side of the game will come with more time and development. Leslie is already showing improvements and is being leaned on more game by game in defensive situations. So far though, his defensive game has looked solid in his first 11 games.

The early returns of Leslie’s first season are very positive. He can keep up with the play and is not afraid to crash the net in the offensive zone. There is no doubt that he will be a force in the WHL for the next few years. If his development continues, he could challenge Bowen Byram’s and Evander Kane’s Giants NHL draft record of fourth overall. Until then, expect to see quite a few Leslie jerseys around the Langley Event Centre once fans are allowed back in.

DUBNetwork › Forums › Mazden Leslie stepping up in his rookie season