The Vancouver Giants added some championship pedigree to their lineup with the acquisition of 18-year-old defenceman Connor Horning.

The six-foot-three, 187-pound rearguard was a part of the 2018 WHL Champion Swift Current Broncos as a 16-year-old, getting into 50 games on a rather older blue line.

Championship experience is something invaluable in this league, especially at such a young age. 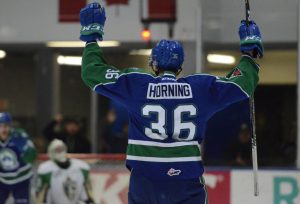 He also brings leadership experience to the table, having been an assistant captain for the Broncos this season.

Dyck continued, “He makes a really good first pass. He’s able to get pucks through. He sees the game really well.”

Horning made his home debut in Friday’s 2-1 loss to the Spokane Chiefs, a game in which the Giants arguably outplayed their opponent.

The native of Kelowna, BC, has played in five games with Vancouver and has transitioned nicely, scoring his first goal on Sunday at Rogers Arena.

“It’s always nice to get the first one out of the way. I think it was a big goal in the game too so it was nice,” Horning said.

A big goal it was indeed as it stood to be the game winning goal on the night, snapping a three-game winless streak.

A veteran of 144 WHL games, Horning has enjoyed being back in his home province.

“So far it’s been good. Obviously we haven’t been getting the results lately,” Horning said about his experience as a Giant.

“The transition has been good though…the boys, coaches, and organization have all been good to me,” he continued.

To earn the right to “employ” the right-handed shot, the Giants had to give up defenceman Kaleb Bulych who spent parts of four seasons with Vancouver.

Horning is currently housed with the same billet that Bulych stayed with during his time here, by himself as it stands now.

Bulych was a good depth piece for the Giants’ run to last year’s WHL Final but was looking for more opportunity — something he will be given alongside his younger brother, Aiden, on a transitioning Swift Current team.

As it stands now, Horning is on the third defensive pairing as he figures out the team systems and gets more familiarized.

The Giants’ top four defencemen can compete with many others in the league, so it can be hard moving up in an older corps.

“We have good defence, so I’m just trying to help those guys — help Bo (Bowen Byram), Leips (Alex Kannok Leipert) out by eating some of those minutes for them,” Horning said.

Regarding his role on this team, Coach Dyck said, “He’ll be a good depth piece for us this year and play a much bigger role next year.”

For now, he wants to keep his game simple and do whatever it takes to help his new team

“Just defend hard and hopefully contribute a little bit offensively as well,” Horning said about what he expects from himself this season.

Basically what he has been doing for a Giants team that’s trying to hang in with a very potent BC Division.

Adjusting to new surroundings can be a tough task, but not knowing anyone coming into it can make thing tougher for new players.

Luckily, Horning did see some familiar faces when he walked into that Vancouver Giants locker room for the first time — mainly Bowen Byram.

“I knew Bowen a little bit before from Peewee. Browner and Krz, I used to go to POE with them so I knew them a bit.”

He also added that captain Alex Kannok Leipert sent him a text right after the trade to welcome him to the squad.

Byram went into a little further detail on how he knew his newest teammate growing up. If you were to look up the two players, there wouldn’t be any connection that comes to mind.

Byram is from Cranbrook, Horning from Kelowna.

The Avalanche prospect explained that his family housed Horning amongst others in peewee for a couple nights at a time as the Cranbrook and Kelowna teams traveled to play one another for a few games at a time.

“I knew him a bit growing up. To see a familiar face around the rink is really fun. He’s a solid D, plays well on both sides of the puck, so he’s helped us tremendously so far.”

Horning and the Giants return to action on Saturday when they visit the Western Conference leading Everett Silvertips, a team coach Dyck has said may be the best team they’ve faced this season.

After that they return home for a rare Tuesday night game against the Prince George Cougars before immediately getting on the bus to play the Memorial Cup host Kelowna Rockets the next night at Prospera Place.

Home › Forums › Horning transitioning well to life as a Giant