After being behind the bench for the latter half of the 2018-19 season, Nick Drazenovic will be leaving the Prince George Cougars after failed contract negotiations.

Drazenovic says he’s moving on after being the Cougars interim assistant coach in 2018-19 and the director of player development since February of 2017. 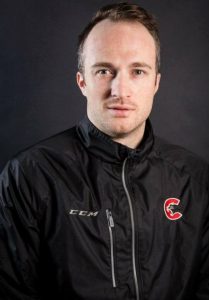 “As much as I wanted to be part of everything it just wasn’t working out,” Drazenovic said.

The Cougars alum now moves on, with his focus shifted away from the WHL. It’s more on building up his own private hockey development program, aimed at minor hockey players called ‘Northern Elite Hockey’.

Often referred to as “one of the most popular Prince George Cougars of all time,” the 32-year-old said it was bittersweet making the decision to step away.

“It was really hard for me. I moved back here because I love Prince George, and I was fortunate to get the coaching opportunity when it came up. I’ve said many times that I planned on winning here and putting banners up, not just one.”

A heartbroken Drazenovic said, with kids of his own now, family was high on the list when he was weighing his options.

“When it came down to it, it just wasn’t the best move for my family, and at the end of the day, I needed to make sure I was taking care of them.”

Recent Cats graduate Josh Curtis shared his thoughts from his time as a player with the 281-game WHL veteran on the bench.

“I think he was a good coach — he was really good with the boys. He kept it light and added humour, all while staying professional and giving quality advice. I’m sure he’ll be missed by some of the guys next season,” Curtis recalled.

One of the newest Cougars alumni, Joel Lakusta, said Drazenovic’s experience helped him offer a unique opportunity that was rare at best.

“It’s always sad to see a player coach go because he’s kind of the middle man between the players and the head coach. He was a good skills coach that had experience in the game at the highest level that could relate to guys,” Lakusta said.

Drazenovic’s desire to run a development program is far from spontaneous, though, stemming all the way back to his own childhood.

“I feel like a lot of kids have missed out over the years as I did growing up, and I’d like to help change that”

Seemingly all players who choose to immerse themselves in this new and modern approach to hockey development that Northern BC has never seen are in good hands.

Although the numbers only add up to 12 games in the NHL, Drazenovic holds over 500 games of AHL experience and had a journey that only a handful of kids from Prince George have had past the year 2000.

Only three from PG have made big league appearances since the century mark other than Drazenovic, including recent Stanley Cup champ Brett Connolly, defenseman Brandon Manning, and Kelowna Rockets alum Brett Bulmer.

“Not only does it add to your credibility, I’ve had a lot of hours on the ice with skills coaches that I’ve learned from and found effective drills I can use moving forward. Now I look to apply those to our local athletes,” Drazenovic relayed.

A number of star players in Cougars history have already jumped on board and teamed up with Drazenovic. All sorts of eras have shown interest, including local BCHL fan-favourite RJay Berra, who serves as an assistant coach with the BC Major Midget Hockey League’s Cariboo Cougars. Former Cougars all-time franchise points and goals leader, and former teammate, Eric Hunter, has also gotten involved. Recent star goaltender Ty Edmonds, who was a major part in the franchise’s only division banner, has joined in as well.

In the big picture, Drazenovic says the more the merrier.

“I just feel like the biggest thing for me, the more people I can bring on with knowledge, the stronger the north can get.”

The city of Prince George, with a population of around 80,000, used to be a hot spot for producing NHL calibre talent, although it’s surely cooled off as of late.

That’s something the man behind Northern Elite Hockey thinks he can change.

“I really wanted kids to not have to do what I did and travel, and every other city in western Canada has these options. I really wanted to do it under the Cougars umbrella, but it wasn’t working.”

Drazenovic says he won’t be taking his talents elsewhere behind a bench anytime soon, either, despite multiple sources who told DUBNetwork there were offers on the table at the WHL level.

“As of right now, I’d really like to focus on my development business and help out as many local teams as I can.”

He plans to do so within the Prince George Minor Hockey Association, with a fellow colleague who was just named the new Association head coach Richard Matvichuk.

To refresh your memory, Matvichuk was just recently let go by the Cougars as their head coach in February of last season.

In addition to that, with BC Hockey also controlling more hockey than ever before in the region, Drazenovic said he has also been in touch with regional lead Trevor Sprague in regards to a partnership.

City limits aren’t holding the new businessman back, either, as Drazenovic says he has been in contact with the surrounding communities of Vanderhoof, Quesnel, and Mackenzie, but there’s plenty more room to grow.

The everyday goal that Drazenovic plans to strive for is affordability for families so they don’t have to send their kids away to academies. The plan is to ease the financial burden forcing parents to spend their life savings when they could keep their kids local and save their bank accounts while getting the same quality training experience.

“My next goal in life is to produce an NHL player, and for him to say thank you. That is all.”

Drazenovic mentioned how magical his path was, and through sharing his wealth of knowledge, he doesn’t see why it wouldn’t be possible.

Arguably one of the most popular players in the organization’s history, Drazenovic acknowledged the fans for all their support over the years and continued to say that the road doesn’t end here.

“When I left, I felt the need to come back and give back because of the fans. Thanks to all of them for being there always for my family and I. It was sad to go but it was time.”